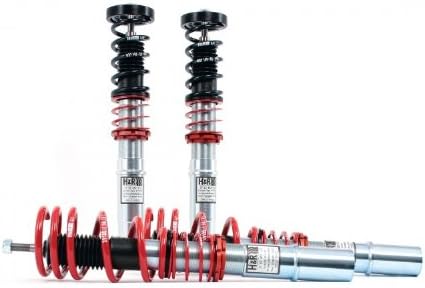 Hamp;R coil-overs are engineered for street use. Unlike traditional twin-tube shock absorbers, Hamp;R coil-overs feature a state of the art mono-tube gas shock construction. Combined with the knowledge and skill of Hamp;R's suspension engineers, the use of this state of the art technology results in the best suspension product that you can buy for your vehicle. Like the Hamp;R Street Performance coil-over, the Hamp;R PCS coil-over is engineered for street use, but has a number of new features designed for the enthusiast who desires an adjustable shock dampening feature. No fasteners or tools to fuss with all it takes is the turn of a knob to adjust your suspension calibration. With Hamp;R PCS coil-overs, nose-diving under hard breaking is virtually eliminated. And, unlike traditional twin-tube shock absorbers, Hamp;R PCS coil-overs feature a state of the art mono-tube gas shock. Features: Adjustable street performance. Lowering range of 1.0 to 2.5 inches on average. Nine-way adjustable damping allows performance and ride comfort changes for driver preference or conditions. Fully threaded shock body for adjustable vehicle lowering.